What Goes Around Comes Around.

The applause was loud as I walked on stage to receive the 2001 Media Peace Foundation's Public Relations Award.  My former business partner and I were being recognised at Auckland University for our "ground-breaking" Pacific public relations campaign that we developed using Pacific languages, cultural communications and media.

The goal was to spread awareness about the law among Pacific communities and change negative mindsets about the law.  I say "ground-breaking" because the tactics we used seemed common sense to us but weren't common practice in an industry unfamiliar with Māori and Pacific cultural practices.

Out of necessity I had adapted a Pākehā framework called the '8 Cs of Communications' from an old public relations textbook and gave it an indigenous twist - calling it the '8 Cs of Māori and Pacific Communications' (see illustration below). It helped give us context for what we were doing and boy did I flog that framework around.

* 8 C's of Māori and Pacific Communications © 2021 by Iulia Leilua is licensed under Attribution-NonCommercial 4.0 International

I even gave a talk about the '8 Cs' to PRINZ (the Public Relations Institute of NZ) and at an indigenous conference in New Mexico thinking I was very cool.  That was until 2008 when I used it in a workshop with a group of Pacific mental health and addiction workers. Not only did it fail to resonate, it flopped badly. Let me explain.

When you talked about Māori and Pacific cultural frameworks at that time, people like Sir Mason Durie, Dr Lita Foliaki or Karl Pulotu Endemann came to mind. The people I faced in that 2008 workshop were at the sharp end of Pacific mental illness and addiction work. None were allowed to do media interviews, even though I had been brought in to teach them media skills and cultural communications for a day. They politely listened when I rolled out my '8 Cs of Māori and Pacific Communications' presentation. But they had already been through Pacific cultural competency training with some of the people I mentioned earlier.

We were at cross purposes the whole day and I couldn't pivot.  It was frustrating, but I remember they asked a lot of questions about how to change the mindsets of Pacific peoples they worked with.  If I'd known from the organisers what they really wanted to learn I would've prepared better, but I missed the chance to make an impact and threw my '8 Cs' in the rubbish.

My encounter with these mental health and addiction workers made me feel a sense of failure for months.  It's probably why I went back to journalism for ten years, where stories are mostly black and white, factual and told in a sequential order. But in public relations you spend a lot of time being reactive and defending or promoting other peoples' ideas.  I can almost hear you thinking, so what's the point? Where are you going with this?

Picking Up The Pieces

The point is that nothing goes to waste, not even bad experiences.  I eventually got over the whole failure thing, did a leadership programme and travelled the world reporting for Māori Television.  I also beavered away on my cultural communications business, studied and prototyped new ideas.

One concept I developed was a human behaviour continuum framework (see below) in response to the questions I was asked about changing mindsets back in 2008. It's nothing new - marketers and political campaigners use this kind of framework all the time.  I had also been prototyping and testing this framework since the Pacific law campaign.

But what I've learned about persuasive and change communications is that shifting behaviours doesn't always happen in one big leap but in small incremental steps.  Government organisations don't seem to understand this if you look at the way their contracts and KPIs are structured. 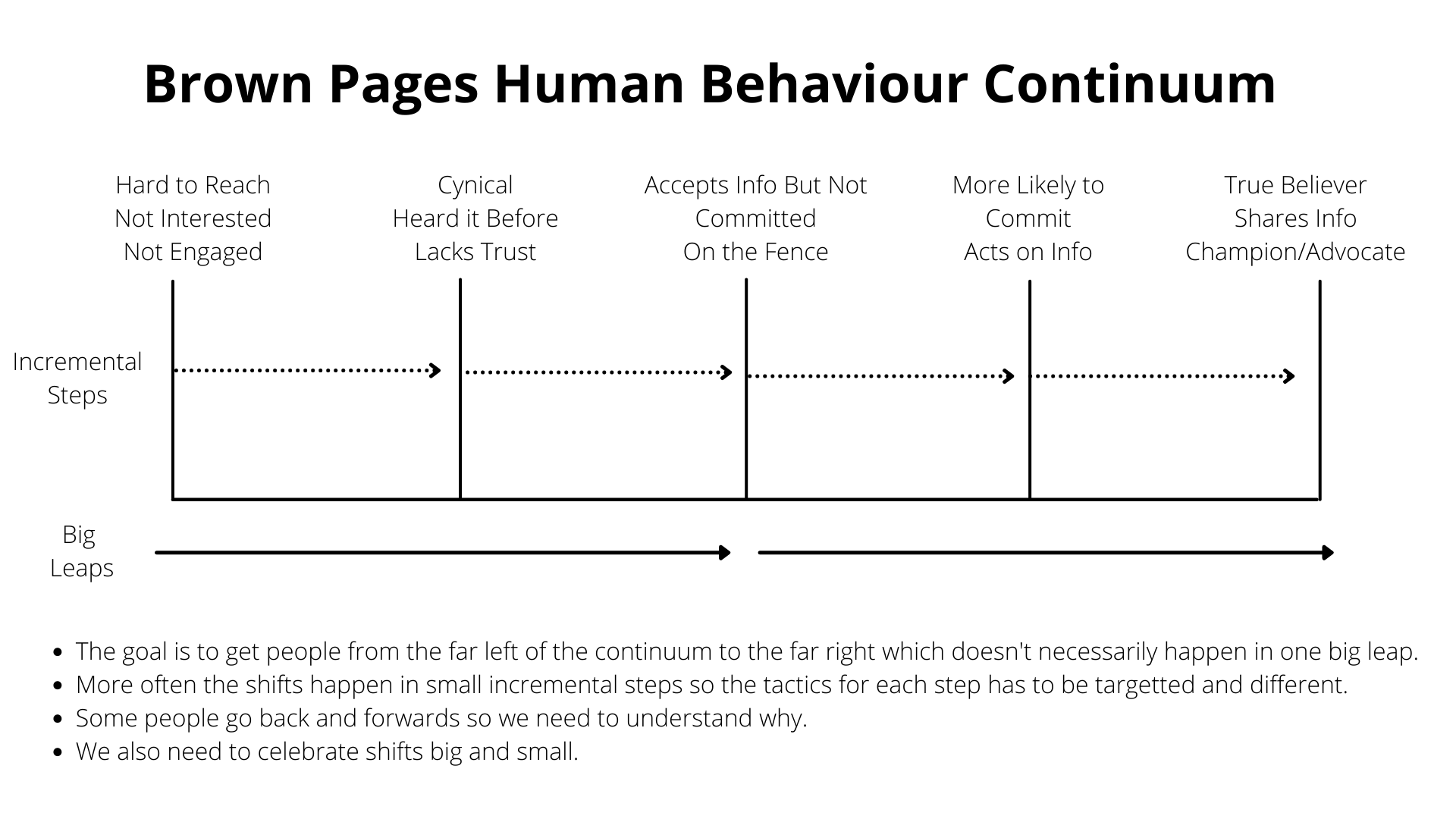 Most want contractors or service providers to make big leaps in a short amount of time whereas lasting, positive change, especially for Māori and Pacific peoples, might happen in incremental steps over a longer period.  Each incremental shift needs to be celebrated rather than seen as a KPI failure.  Makes sense right?

That's what I thought when I joined Oranga Tamariki in 2018 as a Cultural Communications Advisor. I thought my insights would be useful and help make a difference.  That's when I hit another career snag.

Knocking My Head Against The Wall

We all know Oranga Tamariki can create very polarising discussions. I'd covered stories on child removals and grieving families before I joined Oranga Tamariki in 2018. They knew my reputation but said I could make a difference during an intense period of change. Section 7aa of the Oranga Tamariki Act was about to be introduced meaning the organisation had to be more responsive to Māori.

My first task was to write a Māori cultural communications plan for Oranga Tamariki's Whānau Care Service. Surprisingly, I was told that no one had ever written one before. The organisation needed to make some big leaps, so the Māori cultural communications plan I wrote in my first six weeks incorporated short, incremental steps to move stubborn areas.

Despite my hopes that we were going to make positive changes for Māori, it was hard to shift some staffs' attitudes about Māori. I met many amazing people there but there were still huge sections of the organisation who were unwilling to change. Unfortunately several of my managers were information gatekeepers and would not let me speak to the Māori advisory board to check the cultural competency and safety of my work.

What if I had gotten something wrong? I'd be responsible for spreading cultural inaccuracies throughout the whole organisation.  Instead my Pākehā comms managers wanted to pull excerpts out of the raw document and put it straight into their communications plans which were many months overdue.

It got ugly, especially after my ex-producer from Māori Television put my story about Oranga Tamariki forward for an award without telling me.  Done a year earlier, the story focussed on the removal of five Māori children from a family in Taumarunui.  I crossed my fingers for months hoping I wouldn't win Massey University's Best Māori Journalist of the Year Award, but I did.  The following Monday I was congratulated and sacked in the same breath. The staff were told I was leaving to go back to Māori Television which was untrue.

I felt like a huge failure and disregarded again. I went to ground for three months and had to dig deep to nurture my self-respect again.  I'm sure you're starting to see a pattern here.

What Goes Around Comes Around

Like I said before, nothing ever goes to waste.  When I was rock bottom I was offered work in early 2019 by a collective of amazing Iwi, Marae and Māori social service providers in Auckland.  My job was to help them communicate and engage with Oranga Tamariki. Out came my human behaviours continuum and 8 C's of Māori and Pacific Communications frameworks. This time I put more flesh on them, the wars I'd been through made me more resilient and critical in my thinking.

The irony wasn't lost on me when I faced Oranga Tamariki's CEO and Deputy CEs again. I was now on the other side of the table, with the very people they were obligated to engage with.  To prepare for the hui some of the homework I did included:

1)  Researching the historical context of colonisation and the current realities of Tāmaki Iwi and Māori;
2)  Looking at the content of key messaging from Oranga Tamariki - what were they saying? What were they leaving out? How far were they committing?
3)  Observing the complexity within Iwi and Māori conversations and relationships I was privy to including Mataawaka and Taurahere organisations and marae;
4)  Understanding the continued impacts of Oranga Tamariki and its predecessors’ approaches to Iwi and Māori including CYFS and the Department of Social Welfare;
5) Recording the meeting notes and using appropriate channels to communicate with Iwi and Māori stakeholders.

During the fix or six meetings I attended with the former CEO and her deputies I made note of:

1)  Their body language before, during and after their engagement with Iwi and Māori;
2)  The questions they asked which focussed on meeting their legal obligations;
3) The concessions they made about Oranga Tamariki's failures towards tamariki and rangatahi Māori in their care but which stopped short of discussions about devolving their resources and power to Iwi and Māori.

My experience with Oranga Tamariki inspired me to gain my Masters in Technological Futures. My research focussed on how to use emerging technology to disrupt systemic racism.  It has spawned a digital cultural competency platform in partnership with Vibe.fyi which has been taken up by The Warehouse Group and CVL.  I have prototyped a Māori and Pacific stakeholder mapping workshop with MBIE. There are a few other things in the pipeline, as I mentioned to Simon Day, in an article he wrote for The Spinoff recently.

If there's one thing I've learned it's that I want to be shockingly different and I want to work with people who have the same mindset. We're not always going to get applause for being "ground-breaking" or shockingly different.  We may also get put to the test on numerous occasions until we reach breaking point.  All I know is that at this stage of my life, I can live without applause if it means changing the system for Māori and Pacific peoples and living my best life.